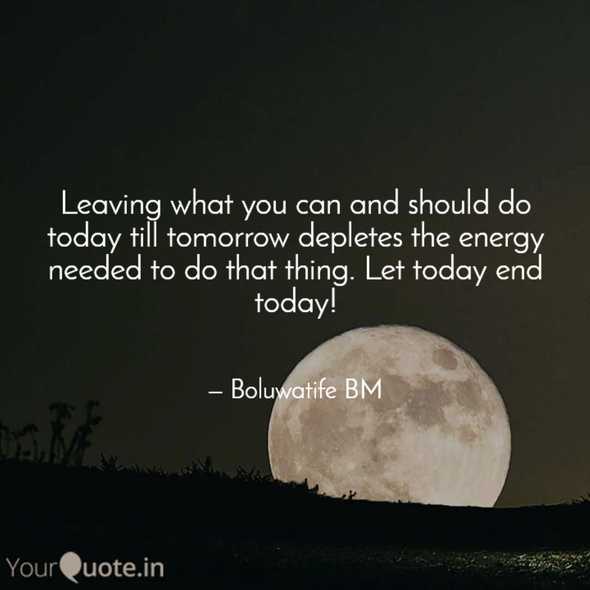 “Procrastination,” according to Edward Young, “is the thief of time.” What exactly did procrastination do that made him accuse it of stealing, and not just petty stealing, but that of time? Theft, according to Merriam Webster dictionary, is the felonious taking and removing of personal property with the intent to deprive the rightful owner of it. See! That seems a grave allegation against “innocent” procrastination, or what do you think? Besides, the law doesn’t pardon theft, regardless of the reason(s) given.

Let’s consider the item that procrastination steals; TIME. What is time? Time is beyond the short and long-hand clicks of a wall clock/wristwatch. It is beyond how many minutes a season movie or activity takes. It is also beyond whether it is West African or East African timing. TIME IS LIFE. “Oh, common! That is always said.” Yes, it is. I guess you’ve never really sat down to know why that statement holds now and ever. “Time is life” goes beyond a cliché; it witnesses to the fact that every second that passes is part of a man’s life that becomes past! (You may need to read that sentence again.) Our lives, though celebrated yearly (birthdays), are accumulations of units of time, and what we do with each second of time is what we do with our lives.

Procrastination is the INTENTIONAL postponement of doing something that should be done. To postpone is to leave till later time. So, how does this lead to theft of time? Delaying an activity that should be done now has a way of rendering the present time allocated for it un- or less productive, and leaves you in a state where you have to find a way to fix it into a different schedule (might be the same day or other days). Often, you end up not doing it as you would have if you hadn’t postponed it. Thus, you are deprived of the real dividends of both the actual time that the activity should be done and the time you eventually do it (if you ever get to do it). Most times, some other important activities become sacrifices for that single action. That sounds like the definition of theft we saw earlier.

Several reasons cause procrastination, but no reason justifies its effect on us and our time. The goal is to endeavor to set realistic targets, such that we do the things that are important and urgent before doing those that are important but not urgent, and eliminate time wasters. In the long run, we want to put our best into all that we do, and watch our lives reflect that fact. Anytime you’re tempted to put off till later, push yourself to do it now!